For other versions of Underswap, see Underswap (disambiguation).

p0pcornpr1nce
Underswap is an AU where many of the characters' roles are swapped, as well as their personalities, though some quirks tend to stick in places, or are modified. Sans is the excitable, confident, extremely optimistic human hunter, while Papyrus is the laid back, protective bro following Chara (who is swapped with Frisk).

The plot of Underswap revolves around each character from the Undertale universe being swapped with other characters, such as Sans' and Papyrus’ personalities being swapped (although they keep the same names, so what we consider Sans to be as a character is now how Papyrus is, for example). All of the songs are remixed to swapped characters as well.

Unfortunately the original creator of the AU has left the fandom and deleted the information on the AU, and has no interest in continuing the project, which is mostly caused by Sans being depicted as Blueberry and fontcest.

These are the character changes of the canon Underswap like it was originally intended to be:

The protagonist of the AU, and the 8th fallen human.

A stuffed animal with Monster Kid's dust on it, which came to life when Undyne experimented on it. It has a "Kill or be killed" mentality.

As former king of the underground, he turned his back on his wife to flee to the ruins where he welcomes fallen humans with open arms, caring and trustworthy. He offers you a nice cup of tea instead of a pie.

A small shy ghost in the outskirts of waterfall, dreams about being a TV star someday. Writes romance stories, and would love to share their collection of them with you. He's not pink, a misunderstanding created by the original image's pinkish color. His name is also not Hapstablook, like many people seem to think. He has a heart shaped eye.

Excitable and loving, training to become a royal guard with Alphys. However, as Sans and Papyrus keep their original stats, his low stats prevent him from being accepted. He enjoys making tacos for his friends, and still is fond of puns. His signature laugh is "MWEH HEH HEH", he says "WOWZERS", and calls himself supreme and magnificent. He does not have a light blue bow, nor does he go by the name Blueberry. He also has a large darkish blue bandana, and his eyes change shape depending on his mood in P0pcornpr1nce underswap.

A laid back jokester who is into practical jokes, though shares a wide variety of other ones with Asgore. Enjoys honey as his favorite condiment and sells corn dogs as a side job. KR still is Sans' thing, and instead he has smarter and stronger attacks, though he is the one who is aware of resets and bleeds after his genocide battle. He wears hoodies with indirect posts on them. He apparently smokes cigarettes (NOT weed), even though he has no lips. He still uses blue attacks, not orange ones.

Has a maid cafe in Snowdin town, confident and maybe a little smug. She sells croissants, tea and donuts, uses roller-skates to serve them to people.

Nice and friendly, sells burgers at his portable burger stand. The wrappers have a handwritten compliment on them.

Captain of the royal guard, fierce and unforgiving. Still enjoys her anime and helps Sans with his cooking every now and then. Instead of spears she uses rotating axes. During the genocide route, she turns into "Alpha Alphys". She thinks anime is real. Instead of an eyepatch, she has a scarred eye.

Ruins Dummy fights Chara out of boredom instead of anger.

Royal scientist, reserved and goofy, made Napstaton’s body for him. Enjoys watching anime/cartoons with Alphys. She thinks Mew Mew Kissy Cutie 2 is better than the original, though mostly watches manime and giant robot anime. Just like Alphys in Undertale, she knows that anime is not real.

The most famous radio DJ of the underground, charismatic and masculine (and frankly kind of a douche). Calls people “bro" and "broski” instead of darling. He likes his arms just like Mettaton likes his legs, and has retractable turntables. Contrary to populair belief, his box form's screen is not blue, instead still using the same colors as Mettaton's in Undertale. He uses rhythm based attacks in battle. His name is not Napstabot, like many people seem to think.

Protector of flames in all the underground. He sells fire based food to raise money for the flames in the Ruins. He's wacky and demanding.

Cynical and shabby, wanted to be a DJ but came to work in the fast food corner of the NTT hotel. He hates his boss.

Queen of the underground, ruthless and persistent. She can’t forgive herself for the lives she took from innocent children. She's more ruthless and emotionless than Undertale Asgore, and uses a scepter as weapon. She offers pie instead of tea.

Asgore and Toriel's adopted son, who died on the surface when trying to free monsterkind.

Frisk was the first fallen human, who poisoned themselves and died to free the monsters. 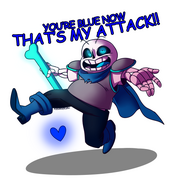 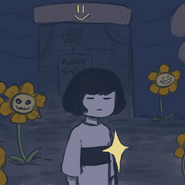